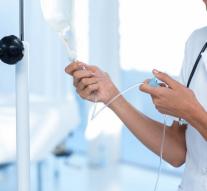 yokohama - The Japanese police may have a serial killer on the trail at a hospital in the city Yokohama. Since July 48 deceased patients on the same floor of the Oguchi hospital and the police think that they are poisoned.

The reason for the study is from two elderly patients this month's death. Which were found to be over their infusion poisoned with a disinfectant. The hospital alerted the police this week after it came to light.

The police suspect now is that an employee of the hospital is behind the series of deaths. The leadership of the hospital stated that there was no outbreak has been of infections that could explain the deaths.