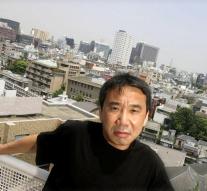 stockholm - The Japanese writer Haruki Murakami is known as the main favorite for the Nobel Prize in Literature. This appears, at least in the gambling at the British bookmakers Ladbrokes. Thursday afternoon will be announced the winner of the highest literary prize.

The Nobel committee gives advance no indication who is in the running for the prize and the shortlist will be announced only after fifty years. The bookmakers have often considerably in the poll who will win.

After Murakami is often used by the Syrian poet Adonis and the American Philip Roth, who recently ended his authorship. The Kenyan Ngugi wa Thiong'o and American Joyce Carol Oates would have a chance.

Last year the Nobel Prize for Literature to the Belarussian journalist Svetlana Aleksijevitsj, exactly as predicted the bookmakers.