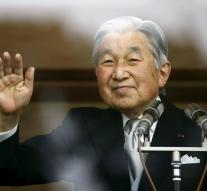 - The 82-year-old Emperor Akihito of Japan wants to retire in the coming years. The public broadcaster NHK reported Wednesday. If the emperor 'retire', this would be the first time in Japan. Akihito's been 27 years emperor. Crown Prince Naruhito is 56 years old.

NHK reported why the emperor on them would like to keep. He has heart problems.