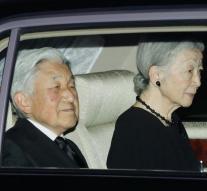 tokio - The health of his ailing Japanese Emperor Akihito can waive according to an advisory from the government of the throne, the Japanese newspaper Mainichi writes. Commissioners say that this can be arranged for him a law, without the need to apply the same for his successor.

Prime Minister Shinzo Abe gave the commission the work after the emperor had said in August in a televised speech that he wanted an orderly succession. Akihito who is 83 next week, said it was difficult for him to devote himself 'with all my body and soul' to his duties as head of state.

The committee next month its opinion. If the parliament adopts the opinion, can Crown Prince Naruhito ascend the Chrysanthemum Throne. The last Japanese emperor abdicated in 1817 was Kôkaku.

Akihito had to cancel appointments Friday because he had a fever. He had flu earlier this year and was previously operated on his prostate to his coronary artery.