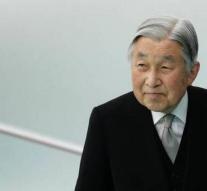 tokio - Japanese Emperor Akihito (82) this weekend had to cancel his appointments because he is ill. He Heef fever caused by a cold. The emperor on for this weekend, the Imperial Palace announced in Tokyo.

In August Akihito expressed his concern about his age and his fear that he is therefore not able to meet all its imperial obligations. Akihito next week 83 years.

Prime Minister Shinzo Abe has already put a committee to work to explore the possibility of an orderly succession. The committee next month its opinion.