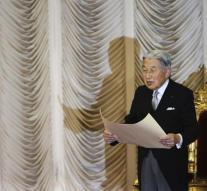 - Japanese Emperor Akihito speaks Monday at 08.00 am (Dutch time) to the Japanese people. In the video message, the 82-year-old monarch announced his possible resignation to.

Akihito underwent heart surgery in recent years and has been treated for prostate cancer and has indicated that he would like to retire in a few years, the Japanese channel NHK reported last month.

The ordinary Japanese may be sympathy for Akihito's desire to hand over the baton to Crown Prince Naruhito, but the step is highly unusual in Japan. Conservative supporters of Prime Minister Shinzo Abe has strongly opposed abdication and finds that the emperor should serve until his death.


According to Japanese law can not retire an emperor. To Akihito which give a chance to the law must be changed first. The government has already promised to look into it.

It is only the second video message from the Emperor, which applies formally as a symbol of Japan and not as head of state. The last time he was so to the people was founded after the earthquake and tsunami that struck Japan in 2011.