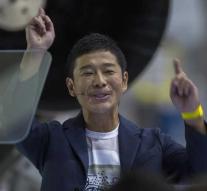 washington - The Japanese businessman and art collector Yusaku Maezawa is the first passenger to join a private space flight from the company SpaceX. He will take a trip along the moon with a rocket from the company and then return to earth again.

The 42-year-old billionaire was present in Los Angeles when the public became known as the first private space traveler. Maezawa says that it was his lifelong dream to enter space. Just thinking about the journey makes his heart beat faster, he said. He may invite another six or eight fellow passengers.

The flight is made with the Big Falcon Rocket, or Falcon 9. That is a new rocket from the company of Tesla CEO Elon Musk, which is still under development. How much has to be paid for a SpaceX space flight is not known. The journey is expected to take place in 2023.