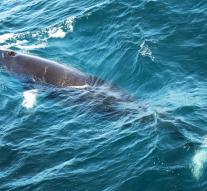 - Japan will again begin whaling in the waters around Antarctica. The whalers will go on in March to catch three hundred minke whales. That the Japanese Fisheries Agency announced, the BBC reported Saturday.

The Japanese whaling has halted more than a year after a ruling by the International Court of Justice. That particular in March last year that Japanese whaling in the Antarctic was illegal and had to stop. Japan pledged themselves to abide by that ruling. Why is the country still has now decided again to hunt whales is unknown.

Japan maintains that it catches whales for scientific purposes. In reality, the animals would primarily on the board or even end up in dog food.