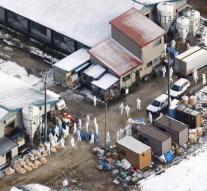 - Japan has begun to cull more than 300,000 chickens and ducks after the discovery of a highly contagious variant of bird flu. The outbreak of the disease on farms in the north of Japan, the first in nearly two years, local authorities reported Tuesday.

In the small village Sekikawa, north of the capital, Tokyo, is immediately began culling chickens at a farm after forty birds were found dead. The animals were infected with a virus that causes bird flu.

Later in Aomori are 16 500 ducks culled after some tested positive for bird flu.