Home / World / Japan is based on North Korean nuclear test 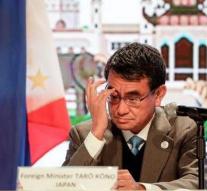 The Japanese Ministry of Defense stated that aircraft from Japan have gone up from Japan to measure any possible radiation.

The signals that indicated a possible nuclear test were two earthquakes, which were recorded at low depths north-northwest of Kimchaek on Sunday shortly after each other. This is an area in which North Korea has previously held nuclear tests.

North Korea already caused increased tensions by flying a rocket over Japan last week. The North Korean press office KCNA announced at the weekend that leader Kim Jong-un had watched a hydrogen bomb on a new intercontinental missile during a visit to the National Nuclear Army Institute.