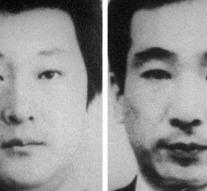 Keizo Okamoto (60) and Hiroya Suemori (67) were hanged at the Osaka Detention Center. They were sentenced to death in 1988 for the robbery of two businessmen. They had kidnapped their victims, blackmailed for money and then strangled. Then they poured the two bodies into concrete and buried the remains in the mountains.