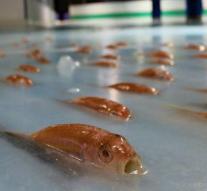 - The 'frozen haven ice rink at the Japanese theme park Space World was closed Sunday after violent protests by visitors. To their horror were 5,000 fish, crabs and other marine life in the ice frozen as part of the special winter attraction.

The theme park announced on Facebook advertising the attraction with photos of the frozen fish and captions like 'I get... d... drink, I s... s... suffocate '. After the ad passed on television, the company received a flood of complaints about him from people shocked and animal lovers.

'We were amazed at the response,' said manager Toshimi Takeda to CNN. 'The rink was open for two weeks and was very popular, we got a huge amount of visitors. '

Takeda was then allowed to know that the ice rink is thawed, after which the fish receive an 'appropriate commemoration' and be re-used as a fertilizer. The fish were purchased at a local fish market and were already dead when they were frozen, he added.