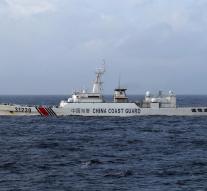 - Japan has officially protested to China after three ships of the Chinese coastguard unheralded Japanese waters were in danger. One of the vessels was, according to Tokyo armed with guns, the Japanese Kyodo news agency reported Saturday.

The Chinese ships sailed near the Senkaku Islands in the East China Sea by both Japan and China are claimed. It was the first time that a Chinese armed coast guard ship sailed into Japanese waters, according to the Japan Coast Guard.