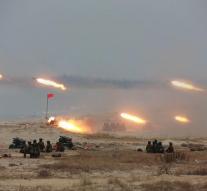 seoul - South Korea and Japan on Wednesday signed a pact to share military intelligence on the nuclear threat from North Korea with one another. Also, sensitive information about North Korea's activities in the field of missile tests are exchanged, reported the South Korean Ministry of Foreign.

The agreement would be signed originally as early as 2012, but was then postponed by South Korea. The reason was domestic opposition to the conclusion of such an agreement with the former colonizer. Japan held Korea between 1910 and the end of World War II occupied.