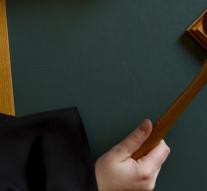 cornwell - A 22-year-old British student has been sentenced to a prison sentence of two years and eight months because she had lied to a teacher that she had a terminal form of cancer. The woman pulled the fate of her student greatly, but has since sucked deeper and deeper into her web of lies. Eventually she became thereby lost everything: her home, her job and her husband.

The judge spoke at the verdict of,, one of the most extraordinary things 'he has ever handled. Teacher Sally Retallack took Elisa Bianco in 2012 temporarily in the house, because the student would be mistreated by her parents. It turned out the first of a whole series of destructive lies. Bianco told shortly afterwards that she had been diagnosed with cancer and that she had only months to live. Retalleck quit her job to care full time for the young woman. Together they worked out a bucket list of things Bianco wanted to do before she would die alleged. That took the gullible Retalleck a small fortune.

The uninvited guest in the life of the mother of four children caused so much tension with her spouse, that was wrecked their marriage. Bianco spent the teacher then contacted her treating physician John with whom the woman began emailing. Those messages were so intimate that a romance between the two ensued. At the time Retallack her new love at last for the first time in person would meet, he was found to be deceased from cancer. At least that Bianco told her. In reality, John had never existed and wrote Bianco all the emails themselves. The times Retallack with 'John' had been on the phone, she called unsuspecting with Bianco, who set up a low male voice.

The deception eventually came to light when the Retallack 'dying' Bianco wanted to surprise in the hospital. They had, however, never heard of her. All times Retallack the student was taken to hospital and had picked up at the end of the day, Bianco had spent in the canteen.

,, I trusted her completely and after a while I put her interests above that of my friends and family because I believed that they had only short time to live, 'an emotional Retallack told at trial. Her life is ruined and she deeply ashamed of her own gullibility. Meanwhile, she emigrated to France in the hope to start a new life.

The judge had nothing good to say about the deception of Bianco.,, Heartless, cruel and calculating, 'he called it.,, No punishment can compensate for the harm you have done to Ms. Retallack. '