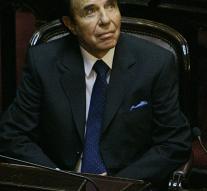 - The former Argentine president Carlos Menem was Tuesday sentenced for illegal payments to a prison sentence of four and a half years. His former Ministers of Economy and Justice received from the court in Buenos Aires in the same process both three and a half years in prison.

The president specter in the years of his reign (1989-1999) the salary of the two ministers with money from the budget of the secret service. The former president's lawyer immediately announced that his client will appeal. The now 85-year-old Menem is currently a member of the Argentine senate and as such inviolable until 2017.