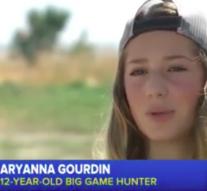 utah - The 12-year-old Jagertje recently shot and killed a zebra and giraffe in South Africa, has a damn about the criticism that befell her through social media. 'I am proud that I am a hunter, I will never' sorry 'to say,' Aryanna Gourdin proudly told by ABC News.

Aryanna posted last week photos online after she shot the African animals with the help of her father. On one of the pictures the girl stood even with the heart of a giraffe in her hands. The girl managed to down a lot and was named including a 'sick animals hater.

'I cherish the hunt and have lots of fun. That part I like with other people. I love animals, but also on the hunt ', responded Aryanna. 'I'm a hunter. Whatever people say to me, I'm not going to stop. '


Her father Eli pays no attention to the criticism. 'I tell other people how they should raise their children. 'According to the father of the killed animals were problem cases. The meat would also be given to an African orphanage.