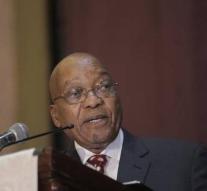 johannesburg - Jacob Zuma can stay on as president of South Africa. The executive committee of ruling party ANC spoke over two days on a motion of no confidence against Zuma, but eventually backed out. The motion came from four of Zuma's own ministers.

Secretary General Gwede Mantashe, the ANC said on Tuesday that the matter had been discussed intensively and open. However, there was no majority to eliminate the 74-year-old Zuma. The president has been in power since 2009. He has for years dogged by a series of financial scandals that have more to do with corruption, fraud and money laundering.

Zuma was in such practices already in court, but who put a line through the case because of procedural errors. In a case the president was acquitted of rape. The then President Thabo Mbeki moved in 2005, Deputy President Jacob Zuma on the side because of corruption allegations. The current mandate of Zuma as president runs out in 2019.