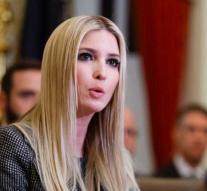 washington - Ivanka Trump sent hundreds of e-mails to the employees of the White House last year, government officials and employees through her personal e-mail account. The daughter and advisor of President Trump was in violation, writes The Washington Post.

Ivanka Trump has admitted that she also uses her private e-mail address in the White House, but only for practical matters. The presidential daughter has already been asked about her mail behavior, but she was not yet an official advisor to Trump.

Donald Trump had a strong criticism of his opponent Hillary Clinton during the campaign for the presidential election because as Foreign Affairs Minister she sent thousands of confidential government e-mails via a private e-mail server.