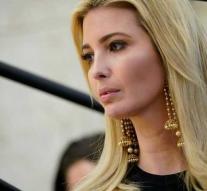 washington - The White House has confirmed that Ivanka Trump attends the closing ceremony of the Winter Olympics in Pyeongchang. Her father, the American president Donald Trump, asked her personally, let Washington know Wednesday. The purpose of her journey is twofold. She is going to pay tribute to American athletes and to emphasize the good relations between the US and South Korea.

Ivanka Trump (36) works as an advisor in the White House. On Thursday she will fly to Seoul on a scheduled flight, where she meets President Moon Jae-in on Friday night in the Blue House, the presidential palace. On Saturday and Sunday she visits competitions, which is not yet known, and in the evening the farewell party.

White House spokeswoman Sarah Sanders will accompany Ivanka Trump, a skier enthusiast. There is no meeting with members of the North Korean Olympic delegation on the program. The biggest South Korean newspaper, Chosun Ilbo wrote on Monday that the government in Seoul will roll out the big red carpet for the Trump daughter, even though according to the protocol this is not necessary.