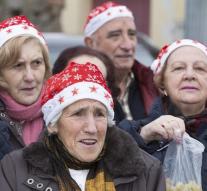 - The new year has arrived in the Western Hemisphere, although not everywhere. The arrival of 2016 is still only celebrated in the Spanish village of Villar de Corneja. The almost fifty mostly older residents decided to bring forward the new year celebration twelve hours, because they do not want to go to bed late, Spanish media reported Thursday


The village is located about 100 kilometers west of Madrid and at exactly twelve noon celebrated their people led by the mayor traditional New Year.
The average age is over 75 years. Young people are drawn away from the shrinking congregation. In the fifties, there were more than eight times as many people.
NEW