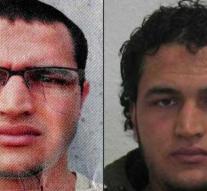 rome - The Italian police rolled up a terror cell that was in contact with the perpetrator of the attack on the Christmas market in Berlin, Anis Amri. The police arrested five suspects in Rome and nearby Latina.

Amri drove on December 19, 2016 with a stolen truck the crowded Christmas market on which 12 people died. The terrorist was shot dead by the Italian police a few days later at Milan.

The arrested members of the terror cell in Italy are all Tunisian, just like Amri. One of the suspects would have provided documents with which Amri could travel to Germany.