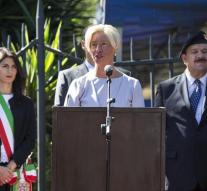 - "Italy will set up a military hospital in the Libyan city of Misrata, where two hundred doctors and nurses and other staff go. Also go a hundred soldiers with the hospital staff along to protect them."

"That said the Italian Minister of Defense Roberta Pinotti Tuesday against a parliamentary committee."

"The government in Tripoli, supported by the United Nations, asked earlier to the Italian Prime Minister Matteo Renzi help to build hospitals."

"It is expected to last three weeks before the hospital in Misrata is operational."