Home / World / Italy has a new government before EU summit 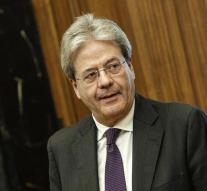 rome - All indications are that Italy has a new government before the EU summit on Thursday in Brussels. The newly appointed Prime Minister Paolo Gentiloni has consulted with political parties and lays Monday at 17.30 Cabinet to President Sergio Mattarella.

Gentiloni's predecessor, Matteo Renzi, has resigned after the Italian electorate had voted out its reform plans on December 4 in a referendum. It plunged Italy into a government crisis.

Mattarella has Renzi's Foreign Minister Gentiloni Sunday asked to become head of government. He will lead a government team that is based on the coalition that helped Renzi's government to a parliamentary majority. Some Italian media were afraid that Italy at the European summit Thursday with no government would sit, but the government of Social Democrat Gentiloni installs allegedly Tuesday.