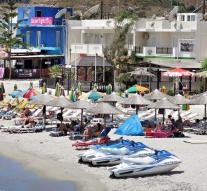 - Tourists lay a towel to assure themselves of the best spot on the beach can be ejected from now rationed. The Italians have had enough.

The Operation Safe Sea 'wants the Italian coastguard tourists approaches that for 8:30 am umbrellas, towels or beach beds at the beach locations. The penalty amounts to no less than 200 euros. According to the authorities, they have not only targeted tourists, there are imposters who like to reserve a spot for a fee for beachgoers.

The fight against the 'appropriation of a piece of public beach 'has already started. Last Saturday was in Livorno 37 beach chairs and 30 umbrellas, towels and even swimwear confiscated, reported the Italian newspaper La Repubblica. The beach police will be active from Tuscany to Sardinia and Campania to Calabria, 'the newspaper said.


It is not the first time the authority to take action against the beach lovers. A few years ago, six tourists in Liguria fined after six o'clock in the morning unrolled their towels on the beach. That took 60 people over a total of one thousand euros.