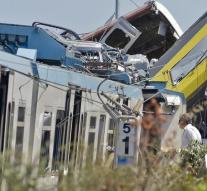 - The cause of the train crash in southern Italy, leaving Tuesday morning, at least twenty people lost their lives, is not yet clear. Two trains collided on a single track head-on between the towns of Corato and Andria. The big question is how the two vehicles could drive simultaneously on the single track.

By the collision were dozens of people injured, some of which seriously. Two carriages were completely torn apart when the high-speed trains clapped together.,, It seems like a plane crash, '' wrote Mayor Massimo Mazzilli Corato the situation at the site of the disaster. On the section being worked on doubling of the track.


The accident is one of the most serious in recent years in Italy. The last major accident was killed when thirty people in 2009 as a freight train derailed in Viareggio.

,, Tears and sorrow for the victims and their families but also a lot of anger, '' Prime Minister Matteo Renzi said through social media.,, We demand clarity on what happened this morning in Puglia. ''