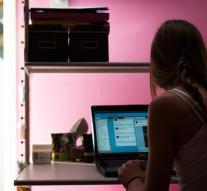 rome - Italy is getting harder against cyberbullying. This will make it punishable to offend or threaten minors online. Schools need more information. In addition, each school has to employ someone responsible for tackling cyberbullying.

The Italian parliament adopted a law on cyberbullying on Wednesday. That happened after several victims committed suicide. 'We are bringing this law to Carolina Picchio and other victims of cyberbullying,' said the deputy chairman Laura Boldrini after the vote.

The fourteen-year-old Picchio cast himself out of a window on the third floor of a building in 2013, after someone had uploaded a movie in which the girl was assaulted at a party.

The Chamber of Representatives showed unanimously Wednesday: 432 MPs voted for. There was only one abstinence.