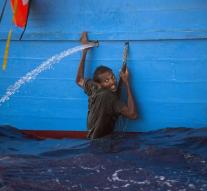 rome - The Italian navy has rescued Monday nearly five hundred refugees to the coast of Libya. For six people, the help came too late. They fell from a lekgeslagen rubber boat and drowned. Their bodies have been recovered. Two patrol boats and two helicopters are still looking for more possible victims.

The helicopters were deployed Monday for the rescue operation took off from the Italian carrier Garibaldi, flagship of the European Union that seeks to curb human trafficking in the Mediterranean. Since the Balkan route is closed, Italy is flooded with migrants fleeing war or in search of a better life. In late August the counter in Rome stood at around 115. 000.