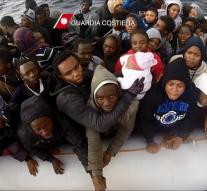 rome - The Italian coastguard rescued Friday 99 boat refugees from the Mediterranean. The group was on an inflatable boat on the Sicilian coast. Has announced that the Coast Guard.

With this rescue on Christmas Day included his last week a total of 1,470 people picked up by the Italians from the sea. On Friday, earlier in the day met all 371 people on the vessel and landed in southern Italy. This group consisted of 312 men and 59 women. There were no children. Most were from Central Africa.

Last year, according to the UNHCR by the United Nations for roughly 150 000 people across the Mediterranean to Italy managed to achieve. That there are fewer than in 2014, when 170 000 refugees managed to cross.