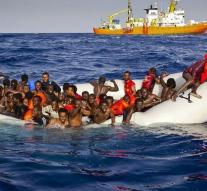 rome - The Italian coast guard on Thursday and Friday a total of 7,100 refugees from boats rescued in the Mediterranean. The Coast Guard says that two consecutive days of good weather the traffickers immediately flock has driven the sea.

Most people who were rescued were boarded boats in Libya. Their origin was Friday still unclear.

In this third year of the migration crisis, according to the Italians still no sign that the flow of people from North Africa trying to reach European shores, becomes smaller. This year alone, relief workers have 60. 000 refugees managed to bring safely to land.


Organizations such as the Italian coast guard and navy, MSF and the European agency Frontex, which controls the external borders managed to intercept Friday nine vessels with migrants.