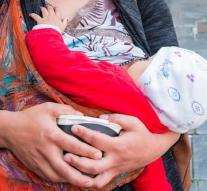 rome - A 35-year-old Italian woman returned the baby she had bought from a Romanian mother after three days. That's what the BBC reports.

The infant tended to be too dark in Italian to think of her biological baby. The woman had been living for months if she was pregnant because of maternity leave in Italy.

By putting the pregnancy in scene and turning on a mother at the same time, the Italian thought everyone was too smart. The Italian woman paid about 20,000 euros for the child. However, the mother had failed to tell that the father was from the African Mali.

The two women were arrested.