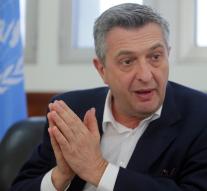 - The Italian diplomat Filippo Grandi was Wednesday appointed head of the refugee agency UNHCR, the United Nations (UN). The General Assembly of the UN has yet to vote on the appointment by Secretary-General Ban Ki-moon. According to diplomats, it is likely that Member States agree.

Grandi is no stranger in the field of refugee affairs at the UN. From 2010 to 2014 was the Italian head of the UN agency UNRWA for assistance and development of Palestinian refugees. At the end of the month following the Grandi Portuguese Antonio Guterres as head of the UNHCR.

The appointment can be seen as a setback for the Danish Prime Minister Helle Thorning- Schmidt, who intimated openly that they saw the sit position. UN officials have said anonymously told Reuters that Ban decided Thorning- Schmidt is not naming because she has introduced a stricter asylum in Denmark.