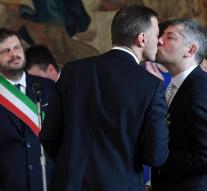 milan - The Italian Secretary of Economic Development Ivan Scalfarotto was married in Milan to his friend Federico Lazzarovich on Saturday. The politician of the Social Democratic Government Party PD is the first ruler in Catholic Italy who makes use of the legislation that allowed homosexuality.

Italy voted in July last year as one of the last EU countries with the equalization of gays and lesbians. The newspaper La Repubblica recently described the measure as a 'flop' because since its inception only 2,800 homosexual couples were given their support.