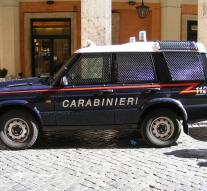 rome - The Italian police have broken up a gang that thousands of asylum seekers from Africa would be smuggled to Europe. Police have 25 Eritreans, Ethiopians and twelve arrested an Italian who were part of the gang.

The detainees are not only suspected of human trafficking, but also drug trafficking and all kinds of financial crimes. The case came to scroll through the testimony of an Eritrean by the police persisted in 2014. The man gave,, for the first time in Italy a complete picture of the criminal activities of one of the most ruthless international human trafficking gangs that operated in North Africa and Italy, '' the Sicilian police said.

The Eritrean led police to a perfumery in Rome, where police hundreds of thousands of euros in cash and found an address book of the gang members.