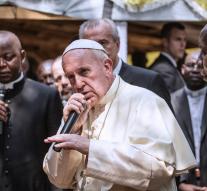 rome - The Italian police have about 3,500 fake charters with blessings from Pope Francis seized. The documents were sold to pilgrims in Rome, authorities said Monday.

The charters were calligraphed and show pictures of the pope. They were printed in Italian, Spanish, Portuguese and English and representing a value of approximately 70. 000 euro.

The nepzegeningen were found in a souvenir shop near the Vatican. The store owner is accused of falsifying goods.

The Vatican is selling the real blessings of Francis for occasions like births, weddings and anniversaries. All proceeds go to projects that help poor and needy in Rome.