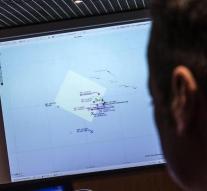 rome - The Italian Navy has a ship salvaged in April with more than seven hundred asylum seekers last year on board sank in the Mediterranean off the coast of Libya. The ship was almost 400 meters deep on the sea bed and was discovered Monday, as the Navy showed Wednesday.

The wreck is brought to Sicily and studied there. Forensic experts remains, that are placed in special refrigeration units, trying to identify. Immediately after the sinking of the ship have already been recovered several bodies. Only 28 people survived the disaster.