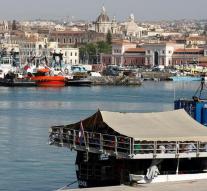 rome - The Italian mafia has found a new market to strike: the refugee shelter. The police in the southern European country arrested Monday 68 people, of whom many mafiosi, who have abused migrants. Thus they left money from state funds in their own pocket, intended to accommodate new refugees.

Among the detainees are a priest and the head of a Roman Catholic organization which has the country's largest migrant shelter. The 68 Italians are suspected of eclipse, fraud and extortion, as well as membership of a mafia organization. Many arrestors would belong to the Ndrangheta, the most powerful of the Italian mafia organizations.

'This operation shows again how the mafia is cut,' said the head of the anti-drug commission in the Italian parliament.