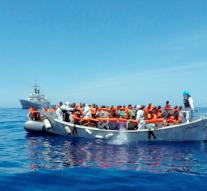 - Ships of the Italian Coast Guard on Tuesday on the Mediterranean rescued 4,500 refugees.

The boat people were taken aboard the ships. A total of thirty rescue missions were carried out, reports the Coast Guard.

The refugees were from Libya on their way to Sicily. Images of the rescue operation can be found here.