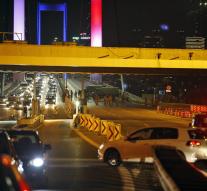 - The traffic to and from the Ataturk airport in Istanbul is halted Friday. That happened after reports that the army, or part thereof, had committed a coup.

According to local media reports shots were heard at police headquarters in Istanbul. Ankara would soldiers have been taken hostage at the headquarters of the army.