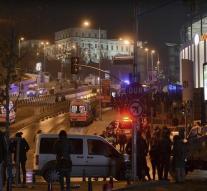 - Saturday, 38 people were killed by the attacks in the Turkish city of Istanbul. That the Turkish Interior Minister Suleyman Soylu announced Sunday. Previously, there was 29 dead.

Among the dead are thirty policemen and seven civilians. A victim has not been identified yet. According Soylu resembles the outlawed Kurdistan Workers PKK responsible for the two attacks. Turkish police arrested thirteen suspects now.

Saturday blew up a car bomb at the stadium of football club Besiktas. Moments later, a terrorist blew himself up near it. There are 155 people were injured of whom fourteen Sunday at the intensive care layers.