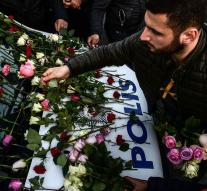 - The death toll has risen to 44. That made Minister Recep Akdağ (Health) on Monday by the attacks in Istanbul..

Saturday blew up a car bomb at the stadium of football club Besiktas. Moments later, a terrorist blew himself up near it. There were 155 people injured. One of the victims has been hospitalized deceased to her injuries. It is according to news agency DHA to a 28-year-old woman, who was at the time of the attacks in a minibus.