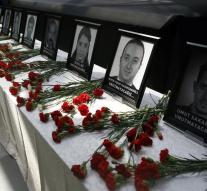 - The death toll of the terrorist suicide attack on the Ataturk airport in Istanbul has risen to 45. Saturday died in a Jordanian hospital from his injuries, reported the Turkish news agency DHA. Among the killed victims are twenty foreigners.

The three culprits, according to government circles an Uzbek, a Kirgiziër and a Russian, shooting Tuesday at the airport around wildly and then blew himself up. There were nearly 240 injured. A large number are still nursed.