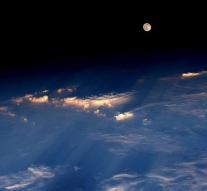 houston - Water is scarce in the area, so drink the crew of Space Station for a while their purified urine. That goes so well that NASA has decided to increase production. The astronauts have even more 'used water' drinking.

The ISS has a special filter urine for a few years. Urine consists for the most part out of water, which is taken out by the machine. But in the remainder is also currently usable water. The new device, to be installed in 2018, was designed to be that there are still out of it. Then, 94 percent of all puddle reused in the ISS as water.

The purification of the urine into the space station produces about 6000 liters of water per year. That does not have to be brought from Earth, which saves a lot of money. Reuse of urine also helps if people ever go far into space, for example to Mars. It tastes just like ordinary water, the only problem is between the ears crew have to get used to the idea that they drink purified urine.,, But before you disgusted at the thought that you drink urine, remember that our water is purer than most of the water you drink at home, '' said astronaut Chris Hadfield in a demonstration video.