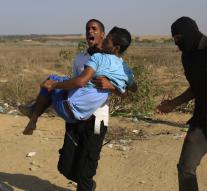 gaza - A twenty -year-old Palestinian boy was slain Friday in the Gaza Strip by Israeli border guards. A boy of twelve was injured. It has notified the Ministry of Health in Israel .

The soldiers opened fire when a group of Palestinian demonstrators attacked the border post near Gaza City with stones. With the death of twenty , the number of Palestinian deaths in the border area with Gaza in a week to twelve. At a checkpoint in Hebron died a Palestinian by Israeli gunfire. He pretended to be a journalist , and then lit a soldier down .

According to the military , the soldier was only slightly injured . The leader of the radical Islamic Hamas movement , Ismail Hanija , called a week ago for a third intifada. He said Friday that the struggle should be intensified.