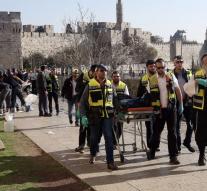 jerusalem - Two Israeli have been killed Wednesday by stabbings in Jerusalem. Two Palestinian perpetrators were shot by patrolling border police officers, according to Israeli media.

The two tasks according to police Wednesday afternoon wildly at the Jaffa Gate, one of the main entrances of ancient Jerusalem. Two police officers saw it and shot down the attackers.

In total, three people were injured. Two of them deceased later in the hospital.