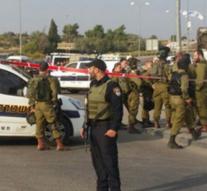 The incident was near the town of Beit Ummar on the West Bank. In Palestine it would be a 23-year-old man.