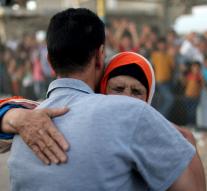 jerusalem - Israeli soldiers have shot dead three Palestinians near the border with the Gaza Strip. Reports said hospital officials. The soldiers opened fire on a group of Palestinians threw rocks and tires on fire.

The stone throwers participated in a demonstration organized in solidarity with Palestinian victims of clashes in the West Bank.

According to the Israeli army had assembled about two hundred Palestinians near the fence on the border. There were fourteen people injured.