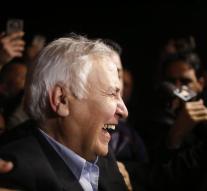 jerusalem - Former Israeli President Moshe Katsav convicted of rape on Wednesday after five years in prison freed early. After leaving prison he stepped smiling and accompanied by his wife Gila in a waiting car.

The 71-year-old Katsav was in 2011 to seven years in prison convicted of raping an employee when he was minister in the late nineties and harassing two women during his presidency.

Women's organizations and women parliamentarians have always resisted an early release. The authorities Katsav still decided to release, because the former president had expressed regret for the pain and sorrow that he did to women. Two previous requests Katsav to be released early, were rejected.