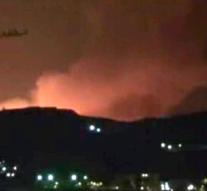 jerusalem - The Israeli Air Force has attacked Syrian Air Force Shield. That happened according to the Israeli forces after military aircraft were shot while they were busy on a flight of Lebanon over Lebanon.

The Syrians fired a rocket on the Israelis according to the newspaper Haaretz. They remained unharmed. Nevertheless, the air force decided to return, after which four bombs were thrown at the air defensive shield. That happened about two hours after the attack on the devices.

'The Syrian regime is responsible for bombings from its own territory,' the army told the newspaper. 'We see this incident as a clear provocation. We do not tolerate that. '

The Syrian Air Force Shield was located about 50 kilometers east of the capital Damascus. The massacre, according to Israel, caused massive damage through the bombing. It is still unclear whether victims were on Syrian side. The Syrian government has not responded yet.

An Israeli army spokesman said Russia was informed about the bombing. That happened 'while it took place or shortly before. 'The Russians give air support to the regime of Syrian President Bashar al-Assad.