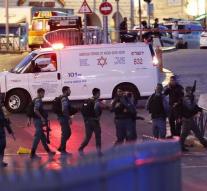 jerusalem - At two coordinated attacks of Palestinians on Israeli police officers in Jerusalem on Friday, an agent was severely injured. Three Palestinian attackers have been killed.

The two attacks took place at Damascus Gate. In one case, two Palestinians were shot dead after they had opened the fire and tried to stab a group of agents. Later a border officer was stabbed, after which the police shot the attacker.